The blooming biodiversity of the Cape Floral Region

Fynbos, and especially protea flowers, are synonymous with South Africa. You must have seen it before? Maybe you have visited and experienced the Cape Floral Region for yourself. Perhaps you have seen the giant pink flower on a postcard, in art and on a coin. Or have you watched an international cricket match and heard about the Proteas, also known as our national team?

Needless to say but South Africans are really proud of their flower power when it comes to the Cape Floral Region. It was even declared a World Heritage Site by UNESCO in 2004. And it has been dubbed as one of the world’s most biodiverse hot spots. On top of that, the region represents less than 0.5% of Africa yet it boasts nearly a fifth of the continent’s flora.

But where is this Cape Floral Region and what is it all about? 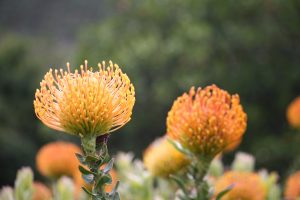 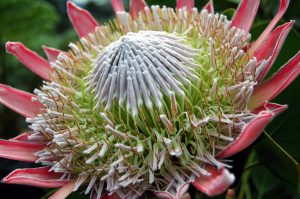 The where and the what of the Cape Floral Region

The Cape Floral Region stretches from the Western Cape into parts of the Eastern Cape. It is known for its sheer diversity, density, and endemic species especially unique to the fynbos vegetation. The variety of proteas – like South Africa’s national flower, the King Protea – Ericas and Restios all form part of this. And there are other biomes which include renosterveld, succulent Karoo, thicket and coastal forest. Across national parks, nature reserves and wilderness areas there are about 9 000 different endemic plant species. Half of these are either threatened or species of conservation concern.

One place to fully indulge the sight and smell of the Cape Floral Region is Table Mountain National Park. Apart from Table Mountain, the park’s rich floral diversity includes The Cape of Good Hope and Boulders Beach. About 8200 plant species can be found here; 80% of which are fynbos. To put it into perspective: British Isles is three-and-a-half times the size of the park, yet it has less than 1 500 plant species. Impressive, right? No wonder Table Mountain was included in the New Seven Wonders of the World.

The plants are best discovered on foot, especially if you go hiking in the national park, or visit other areas like De Hoop in the Overberg, Cederberg and Baviaanskloof in the Eastern Cape. An alternative option is to visit Kirstenbosch Botanical Gardens in Cape Town, the first of its kind UNESCO included in a floristic region.

The Value of the Cape Floral Kingdom

However, besides adding colour to South Africa’s landscape, fynbos is also a valuable gem. Its captivating beauty attracts millions of visitors per year. Plants are also harvested for flower markets, medicine, and interesting innovative creations like fynbos-infused gin, oil and tea such as rooibos and buchu. Of course, the ecosystem benefits as well. Scientists are forever intrigued by how the species adapt to fire and other disturbances. It is a water-friendly type of vegetation, and its root systems allow for water to flow into rivers, and catchment areas. The Cape Floral Kingdom also provides food for South African honeybees, which in turn provide delicious honey for us. And did you know that the region is home to the rare and endangered geometric tortoise and the Table Mountain ghost frog?

The natural heritage of South Africa stretches from the mountains into the valleys, all the way to the coast. And one thing is certain: there is so much more to the Cape Floral Region than just flowers.

Get in touch if you want to discover the beauty of South Africa through its floral landscapes. One of our tailor-made tours might just be the thing for you.