South Africa is the living embodiment of cultural diversity. It is a melting pot of history, people, traditions and 11 official languages. Undoubtedly, it lives up to its claim to fame of being the Rainbow Nation.

Post the 1994 Apartheid era great efforts were put into place to recognise the multilingual facets of South Africa. The idea was to elevate, celebrate and advance the indigenous tongues that were previously suppressed by the government. And furthermore, in 1997, South Africa’s Democratic Constitution came into effect to declare nine indigenous African languages official, alongside English and Afrikaans.

With so many languages it is fairly common to be part of conversations in a language that is not your mother tongue. But what connects a rainbow nation who is often lost in translation is the spirit of ubuntu (isiZulu for humanity) and a South African braai (Afrikaans for barbecue) while Kwaito (a South African genre of music) beats to the rhythm of diversity in the background.

English dominates as the language of politics, media, entertainment, and commerce, but rubbing shoulders and clicking tongues with the 10 other official languages are part of the journey. 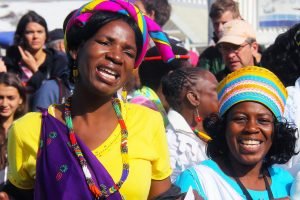 How to say “hello” your way around South Africa

Hello! About 9.6% of South Africa’s population speaks English as a first language, yet it is widely spoken in official and commercial day-to-day life. In addition to this, many words used in South African English are influenced by other languages in the country.

Molo! isiXhosa has about 8 million first language users (16% of the population). You can hear the click sounds of isiXhosa in the Eastern Cape especially. South African music legend, Miriam Makeba, is well-known for her isiXhosa Click Song (also known as Qongqothwane).

Goeie dag! Afrikaans developed from a 17th century Dutch dialect brought to South Africa in 1652. Today 13.5% of the population uses it as a first language at home. Did you know that Afrikaans is the world’s youngest language? It was only declared official in 1925.

Dumela! Sepedi has 4.6 million first language speakers; the language is also known as Sesotho sa Leboa, which translates to northern Sotho. Sepedi is the language of the Pedi people of Mpumalanga and Limpopo.

Dumela! Setswana first language speakers make up about 8% of South Africa’s population, and can be found in the north western regions. Setswana is also part of the Sotho-Tswana family. Even though some words might be similar to other indigenous languages, there are still many differences.

Dumela! Sesotho (another member of the Sotho-Tswana language family) has 3.8 million speakers in South Africa. Most Sesotho speakers are from the Free State, and the landlocked country of Lesotho.

Avuxeni! Xitsonga has about 4.5% first language speakers in South Africa, occurring in the Limpopo Lowveld, where South Africa shares a border with Mozambique.

Ndaa/Aa! Tsivenda is the second smallest language in South Africa, making up only 2.4% of South Africa’s population. The Venda people speak this language; they reside in the Mapungubwe area of Limpopo and share a lot of cultural similarities with the Shonas from Zimbabwe.

Lotjhani /Salibonani! isiNdebele is the language with the smallest number of speakers in South Africa. In fact, just 2.1% of the population uses isiNdebele as a home language and it is confined to Mpumalanga and Gauteng.

One of the most rewarding places to visit in South Africa, to experience the multilingual sounds, is Soweto. Soweto is a community of extremes; 37.1% of the citizens speak isiZulu, followed by Sesotho speakers. It is the only place in the world where two Nobel Peace Prize winners, Nelson Mandela and Archbishop Desmond Tutu, lived in the same street. And just two blocks from Vilakazi Street is the memorial and museum in honour of Hector Peterson, the 13-year-old who was shot and killed during the Soweto-uprising to protest the sole use of Afrikaans in schools.

The term ‘rainbow nation’ is more than just a description of South Africa; it is something you can see, taste, touch, feel and most definitely, hear.