The Rovos Rail really gives meaning to the saying, ‘it is not about the destination but the journey’. Imagine opulence at its finest. Above all, excellent on-board service with some added vintage comfort. And then you will understand why the Rovos Rail has been voted as one of the world’s most luxurious trains. Numerous times. And no wonder it has been dubbed the Pride of Africa.

The train’s journey started in 1985 when founder, Rohan Vos, bought a few coaches on an auction. A passenger train was not part of his plan but after numerous red tape with the railway, the decision was made to turn a hobby into a business. On 29 April 1989, the train with a locomotive and seven carriages was launched. On board were four paying passengers, friends, and press on a four-night Lowveld experience. And the rest, as they say, is history. And in this case, a very important part of South Africa’s railway history.

All the engines obtained for Rovos Rail have been named after the children of Rohan Vos; there are Brenda, Bianca, Shaun and Tiffany. The last-mentioned engine is the oldest engine, the smallest and it is still being used from time to time. Over the years more and more vintage coaches have been added to the fleet. Which makes the Rovos Rail to date one of the biggest private collections in the world. Up to 72 passengers can be accommodated in style and comfort. And each train consists of lounge cars, an observation car, a smoking club lounge, dining cars and sleeper coaches.

And to think the dream started with one person! Now the team consists of more than 400 staff members and thousands of passengers have enjoyed their own Rovos experience over the years. 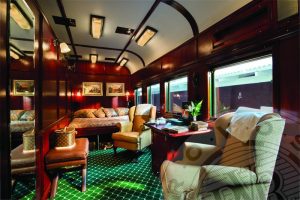 All aboard the Rovos Rail

Today the Rovos Rail is the embodiment of yesteryear’s romance with a Victorian atmosphere, and modern-day comforts. It is a voyage through the awe-inspiring landscapes of South Africa, Botswana, Namibia, and Zimbabwe. The service is impeccable, and the suites are known as the most spacious in the world. The dining experience is five-star. To maintain the spirit of a bygone area there is even a dress code for the evening in the form of suits, ties, and dresses. And of course, in true old school fashion, no radios or televisions are on board.

In a series of journeys lasting from 48 hours to 15 days, Rovos Rail links some of Africa’s greatest destinations. Some of the offerings include rediscovering the old pioneering trail of the Karoo, on a journey from Cape Town to Matjiesfontein. There is also a trip to Victoria Falls, where you can have a train safari through Hwange National Park. And let’s not forget the golf safari, the Namibia or Durban Safari, and the 9-day trip between Cape Town and Pretoria. You can even hire the train for private and corporate train safaris.

What else is there to say other than ‘all aboard!’

Rovos Rail is a unique take on experiencing the beauty of Southern Africa. Jaw-dropping scenery, picture-perfect panoramas, wildlife and interesting small towns are all part of the journey.