In the late 1960s the spotlight was on South Africa when the world’s first successful human to human heart transplant operation took place. One family’s tragedy was another man’s key to life, even if it was short-lived.

Beating to the rhythm of revolutionary, the procedure was performed in Cape Town’s Grootte Schuur hospital by South African surgeon, Christiaan Neethling Barnard. Prior to the first human-to-human heart transplant, the closest surgeons came to this type of operation was in 1958. However, the patient was a dog. The operation, which took place on the 3rd of December 1967, changed the course of cardiac surgery forever. It was iconic. At the time, cardiac surgery in general had only been performed for 10 years. And the procedure put South Africa, and Africa, at the forefront of medical innovation.

The road to the world’s first heart transplant started in Beaufort-Wes, the birthplace of Doctor Christiaan Barnard. He went on to study medicine at the University of Cape Town. It was the death of a new born baby with a heart defect that pivoted his interest in cardiology. Heart surgery pre-occupied his mind and he was afforded the opportunity to work in Minneapolis under Professor Wagensteen, a teacher of experimental surgery. Barnard built up surgical expertise and returned to South Africa in 1958 with a gift from Wagensteen, a heart-lung machine. This machine marked the start of the first heart unit, the beginning of the heart transplant team.

Louis Washkansky, a 53-year-old who suffered from gross heart failure, had a short time to live and was prepared to take the chance. A heart became available when a young woman, Denise Darvall, suffered severe brain damage from a car accident. Her father agreed to donate her organs and the rest, as they say, is history.

Thanks to the skill and support of a large team the first human-to-human heart transplant took place. The operation lasted for 9 hours. Following the procedure, Washkansky was given medicine to supress his immune system. Unfortunately, the anti-rejection drugs also made him more susceptible to sickness. After the transplant, his heart functioned normally for 18 days before he unfortunately died from double pneumonia. 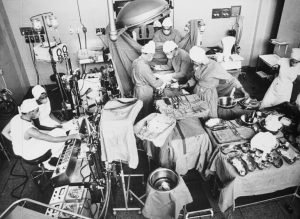 See the first heart transplant with your own eyes

A heart transplant is something you wish you, or your family never have to experience. It is a situation of life or death, whether you are on the receiving or giving end of the operation. However, getting a glimpse into this ground-breaking surgery, is a once in a lifetime opportunity. And The Heart of Cape Town Museum can give you that opportunity.

Situated at Cape Town’s Grootte Schuur hospital, where the surgery took place in 1967, is the Heart of Cape Town Museum. The museum honours those who played a role in the surgical feat.

The interactive museum is filled with artefacts and archives. It gives you, the visitor, the opportunity to visit the rooms where the first heart transplant took place. It gives you a life-like glimpse into the life of Chris Barnard, the patient Louis Washkansky and the donor Denise Darvall. The operating theatres were recreated into a display with an authentic representation and life-like wax figures. And through a guided tour you will have the opportunity to peek into an era where it became possible to transplant the symbol of the essence of life: a human heart.